Honda has begun producing and delivering critical components for the production of much-needed ventilators to Dynaflo Inc. of Reading, Penn. Honda teamed up with Dynaflo to increase Dynaflo’s production of diaphragm compressors, a key component of portable ventilators that are used in hospitals and by first responders throughout the country to help those stricken with the COVID-19 virus. The companies are aiming to produce 10,000 compressors per month once production reaches capacity. Honda and Dynaflo expect to maintain production of compressors through the end of August. END_OF_DOCUMENT_TOKEN_TO_BE_REPLACED This is Honda’s 73rd win in Formula One, the first since the 2006 Hungarian Grand Prix and also the first in the current hybrid power unit era.

Starting from second place, Max had a difficult start and dropped to seventh, one position ahead of Pierre. The two ran in tandem through the early laps before Max started making progress, overtaking Lando Norris and Kimi Raikkonen to move into the top five.A long first stint saw Max lead for a spell, and after pitting for hard tyres on lap 31 ­later than his rivals ahead he rejoined in fourth place ahead of Lewis Hamilton. From there,Max was on a charge and fought his way past Sebastian Vettel and Valtteri Bottas to run second, before hunting down Charles Leclerc. END_OF_DOCUMENT_TOKEN_TO_BE_REPLACED Five other lucky fans rode off with motorcycles also won at the raffle on the night France beat Croatia 4-2 to win the world cup for the second time. END_OF_DOCUMENT_TOKEN_TO_BE_REPLACED 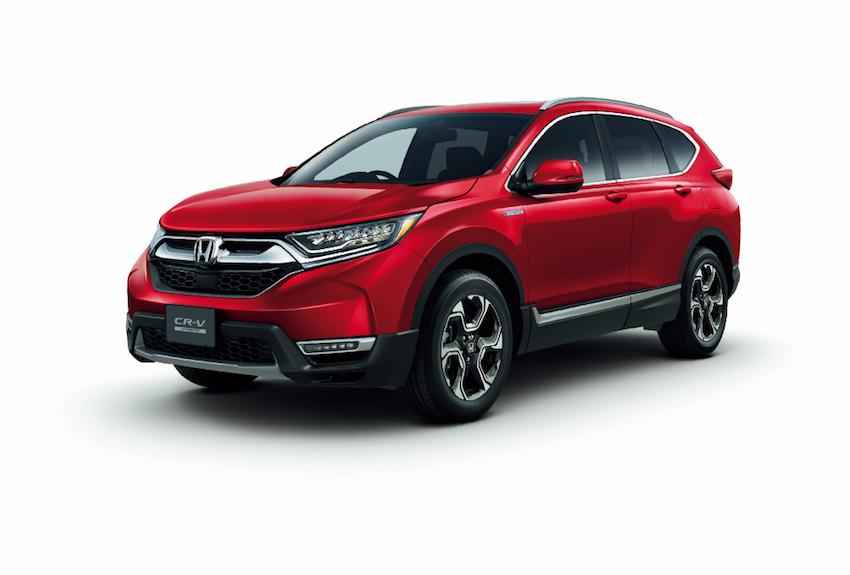 The Honda CR-V is one of the biggest selling SUVs on the planet. In the U.S. alone, it sells around 30,000 units every month. Just think about that figure for a moment.

That means Honda sells 1,000 CR-V’s every day. At an average sticker price of around $28,000, with a few options added on, that translates to $28 million earned by Honda every day of the year, from just one model. If we do the math, this means the CR-V’s annual sales clear $10 billion! Together with the Accord and Civic, which both sell in similar numbers, the CR-V is one of Honda’s bread and butter models and therefore matters.

So an all-new model is a big thing for Honda. In battling the big-selling Ford Escape, Nissan Rogue, Toyota RAV4, Jeep Renegade, Mazda CX-5 and Subaru Forester crossovers for segment dominance, the CR-V had to up its game. And that’s exactly what Honda did.

Designers did not opt for incremental tweaks to the crossover’s exterior, cabin and performance. They went all out. The fifth-generation CR-V has been completely redesigned from scratch and re-engineered with better handling and ride quality, a new turbocharged engine and a 3rd row of seats option that is unfortunately not available in the U.S. Perhaps the success of a 3-row, 7-seat option that’s on sale in Australia, for example, might tempt Honda of America to eventually add this version. 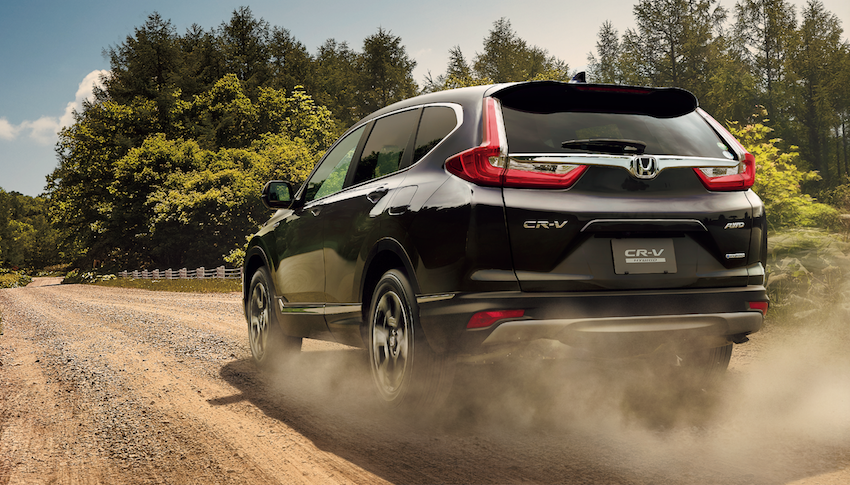 Honda delivers on handling, ride, safety and technology.PHOTO BY HONDA

The CR-V employs a revised suspension setup that’s firm enough to reduce body roll in corners but compliant enough to deliver arguably the most comfortable ride quality in the segment. The Honda also offers a sharper steering response that is direct with excellent feel and weight and plenty of information from the road surface.

McLaren-Honda unveiled its new machine, the McLaren-Honda MCL32, prior to its winter testing at the Circuit de Barcelona-Catalunya, for the upcoming 2017 FIA* Formula One (F1T) World Championship. The Honda RA617H, 1.6-litre V6 turbo engine with ERS, has been decreased the weight and lowered the centre of gravity to improve the balance of the car, while generating more output out of the ICE [internal combustion engine]. And the power unit will be fitted into the MCL32 for the 2017 season.

The MCL32 follows in the evolutionary footsteps of its two immediate predecessors, MP4-30 and MP4-31, but has been overhauled in every area as the design team has looked to capitalise on a series of new aerodynamic regulations introduced for 2017.

For more information about the McLaren-Honda MCL32 unveil:
http://www.mclaren.com/formula1/

* FIA is an abbreviation for the Fédération Internationale de l’Automobile.

While instantly recognizable as a member of the Honda family, the new BR-V features bold, distinctive styling and a sporty, agile appearance, linked to the raised stance and rugged appeal expected of a SUV.

The TICAD conference was officially opened by the Kenyan President, His Excellency Uhuru Kenyatta and Brought together over 30

African heads of states, the Japanese PM, Shinzo Abe and numerous dignitaries from across the world.

Over 75 Japanese and foreign  firms arrived in Nairobi as the sixth session of Tokyo International Conference on African Development (Ticad) got underway. Key among them was Honda which was exhibiting in the main hall.

“Achieving FAA type certification for the HondaJet is a monumental milestone for Honda,” said Fujino. “We established Honda Aircraft as a new aerospace company and introduced our first product – an advanced light jet with technologies developed from serious research activities. We designed, tested,

and have now certified this clean-sheet design aircraft – an unprecedented challenge for Honda.”

Honda Aircraft Company validated the HondaJet’s performance, safety, function and reliability through rigorous ground and flight tests with the FAA. Total flight hours exceeded 3,000, with testing conducted at more than 70 locations across the United States.

“This day was achieved through the collaborative efforts of the FAA and Honda Aircraft Company,” said Melvin Taylor, manager of the FAA’s Atlanta Aircraft Certification Office. “Collaboration is not easy, it often is a difficult subject. But�when it is done successfully like this program, the rng to us all.”

The HondaJet’s innovative Over-The-Wing Engine Mount configuration, natural-laminar flow wing and composite fuselage make it a higher performance, more fuel-efficient and more spacious light jet. The HondaJet is the fastest in its class at 420 knots (483 mph) and the most efficient in its class.�

With HondaJet FAA type certification achieved, Honda Aircraft is now ramping up production in Greensboro with 25 aircraft on the final assembly line. The Honda Aircraft workforce is nearing 1,700 people, as the company prepares for deliveries, pilot training and after-sales customer service and support by the end of the year.

“This is an exciting day for North Carolina and our state’s aerospace industry,” said North Carolina Governor Pat McCrory. “As far back as the Wright Brothers’ first flight at Kitty Hawk, our role in aviation has always been significant. Now, when we look up in the sky, we will see jets made right here in North Carolina. Congratulations to Honda Aircraft Company on this enormous achievement.”

The HondaJet is the fastest, highest-flying, quietest, and most fuel-efficient jet in its class. The HondaJet incorporates many technological innovations in aviation design, including the unique Over-The-Wing Engine Mount (OTWEM) configuration that dramatically improves performance and fuel efficiency by reducing aerodynamic drag. The OTWEM design also reduces cabin sound, minimizes ground-detected noise, and allows for the roomiest cabin in its class, the largest baggage capacity, and a fully serviceable private aft lavatory. The HondaJet is powered by two highly fuel-efficient GE Honda HF120 turbofan jet engines, and is equipped with the most sophisticated glass flight deck available in any light business jet, a Honda-customized Garmin� G3000 The HondaJet is Honda’s first commercial aircraft and lives up to the company’s reputation for superior performance, efficiency, quality and value.

The 2016 Honda HR-V (http://automobiles.honda.com/hr-v/), the brand’s stylish and versatile crossover, has been named “2016 Green SUV of the Year™” by Green Car Journal.

“The Honda HR-V is a truly unique new subcompact crossover, delivering the space, utility, comfort and feature content of a larger vehicle, with the sporty driving dynamics and class-leading fuel economy ratings on par with a small car,” said John Mendel, executive vice president of Auto Sales for American Honda. “All of us at Honda truly appreciate Green Car Journal for recognizing the HR-V as Green SUV of the Year and as the latest in a growing lineup of products with class-leading efficiency and low emissions.”

Deprecated: Directive 'allow_url_include' is deprecated in Unknown on line 0